Transdisciplinarity, intercommunication, crisscrossing, and interconnectedness are the vital words in the vocabulary of "Through a Fluid Mosaic". In biology, the ‘fluid mosaic’ is a model that explains the paradoxical nature of the living cell’s membrane that acts as a porous and malleable barrier. This membrane represents a liminal border that is liquid, permeable, chaotic, and unshaped, where mosaics form and unform.

When curator Maica Gugolati became familiar with this biological concept a year ago she knew it could be a theme with significant content also for an artistic project. She then started to develop a net: the kick-off was to invite artists from different parts of the globe to work in the infinite connections between mathematics, biology, nature, gender, art, and anthropology. Maica asked the artists to find inspiration in the concept of ‘Fluid Mosaic’ to create new works or select past works. In a one-to-one dialogue with each of them, she built bridges that would allow interwoven relations between the artworks and approaches. At last, she chose the form of a simple knot to give shape to her online exhibition on Art Curator Grid’s platform. In this show, there is no start or endpoint: these endless trajectories and entanglements evoke the dynamic state of the ‘fluid mosaic’

Congolese artist Shaka Fumu created performance, clothing, and music to connect the past, present, and future of his country. In the video-performance “Les Robots”, he walks around the streets of Kinshasa wearing full-body costumes and facial masks made of recycled materials found in the dumpsters. In the video, the characters he entitled Robots are continuously followed by dozens of children who at moments are attracted and others scared by him. “This playfulness renews the feeling of wonder in these children, letting them assume their childhood”, explains Maica in the text she wrote about the artwork (each piece of the online exhibition has an explanation of the curator). The artist recalls his personal experience as a child in the “Six-Day War” in 2000, which prevented him from living his childhood.

“Take Me for a Walk” is another walk performance by Rabbya Naseer presented in the show. She offers us a video that tackles the paradoxes a moving barrier can embody. Rabbya walks with a wall along the market streets of Lahore in Pakistan to question disparities between gender, class, space, and national and religious identity. “For the viewers, the wall can’t keep any separations as it moves. But for the one who moves alongside it (or embodies it), the wall is a constant border despite its movement. Beyond this rather physical interpretation, the wall also represents the internal emotional barriers a person can carry with them”, says Maica in the works’ abstract.

Movement and transgression of boundaries are also subjects in the video “In Transit” by Kwang Lin Wong, who made a film in which a group of dancers performs at the airport, the subway, and the bus of Singapore. “The video offers us a mobile journey through emotional and relational encounters that permeabilize inner borders. In doing so, it provides an empowered possibility to the transiting human thanks to relational movements”, writes the curator. American artist Holly Bass also presents a video created exclusively for the online show and takes us to the Detroit River’s shore. In the 19th century, it was a crisscrossing zone of territorial conflicts between the developing nation-state of the USA and nowadays Canada.

The artist born in Trinidad and Tobago Rodell Warner took advantage of the digital realm of the exhibition to create four hypnotic GIFs entitled “Miniature Black Holes”. He shows us the fluidity of the particles that are embedded in a fluid mosaic. Jamaican Di-Andre Caprice David challenged the digital space even further since she created an installation for an online experience. “NOT YOUR KIND OF ARTIST – More Than What You Thought” is composed of floating screens that bring natural elements present in the Jamaican environment with a robotic and computerized aesthetic. “Her hope is for these stories to return a sense of ‘care’ to nature in the Jamaican society by reaching out to its youth”, affirms the curator. Finally, the photograph by the Lisbon-based duo Letícia Barreto and  Joaquim S. Marques “The Lines of Destiny” tackles the matter of immigration and the intercrossing of lines being them individual boundaries or national borders.

“Independently from the language every person can access this exhibition”, claimed Maica during the live Q&A she engaged with Art Curator Grid founder & director Pauline Foessel, which was held in conjunction with the opening on Zoom (watch the full conversation on the video below). If her initial wish was to meet all the artists together in order to create a space of exchange, it soon became clear it would not be possible: “Some of the artists live and work in areas where electricity is not constant, where internet data is very expensive, where WIFI is not possible. The locations of the artists are very different and matching a time where everybody was available was almost impossible. Furthermore, not everybody speaks English. So I became basically the ‘medium’, the ‘bridge’ of all of them.” The long process of exchanges, sharings and dialogues were key to constitute one memorable fluid mosaic.

"Through a Fluid Mosaic"
Curated by Maica Gugolati
On view from November 5, 2020 exclusively on Art Curator Grid 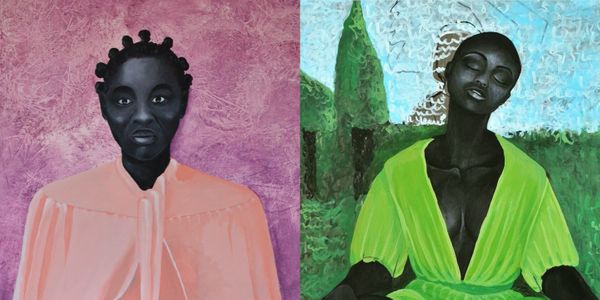 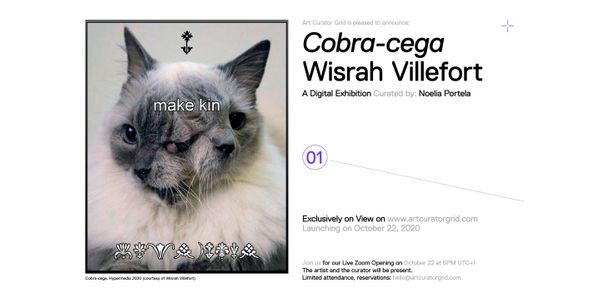