One of the most important art prizes in Portugal, the EDP Foundation New Artists Award has just opened its new exhibition at MAAT - Museum of Art Architecture and Technology, with works from six emerging artists of the Portuguese art scene: Adriana Proganó, Andreia Santana, Bruno Zhu, Maria Trabulo, René Tavares and Rita Ferreira. Inaugurated on October 4th, the 14th edition of the Prize took place on the same occasion as when Artpool and Solimán López opened the Celeste exhibition at MAAT (click here to know more about this project).

The New Artists Award finalists were selected from more than 700 submissions which were evaluated by the Portuguese curators Luís Silva, Luísa Santos, and Sara Antónia Matos, who are also responsible for the exhibition at MAAT. "The six nominees have works that are very powerful and very different from each other. So our decision was not to organize a collective exhibition with a single narrative, but six unique solo projects," said Luís Silva during the press preview of the show. The three curators have worked with the finalists on commissioned works for the exhibition, and the outcome is a wide range of statements that go from decolonization, memory, and the destruction of monuments, to nature, ecology, and the act of painting.

From Syria, Maria Trabulo (Portugal, 1989) brought a suitcase full of sand - which she used to create the Fragile Stones installation-, as well as stories and testimonies collected during her trip to the country. The potent work talks about the destruction of archeological sites in Raqqa during the occupation by the Islamic State between 2013 and 2017. She carried out interviews at the Raqqa Museum and the Syrian Heritage Archive to extol the institutions that protected monuments and artifacts during the invasion. In the video, she brings amazing testimonies like that of the Aleppo Museum's director, who lives as a refugee in Berlin. He talks about how the museum team moved in with their families to protect its artifacts: "These people are heroes fighting to protect the memory and history of objects and places," said curator Sara Antónia Matos as she presented the work during the press preview.

The project entitled Estado Novo do Atlântico [new state of the Atlantic] by René Tavares (São Tomé, 1983) is another highlight of the exhibition. It addresses (de)colonization by evoking narratives that are a common heritage shared between Portugal and its African ex-colonies. In the beautiful painting-installation Carruagem Lusa [Portuguese carriage], he uses pigments to talk about racial prejudice and writes expressions commonly used in African countries to refer to different skin colors. For the video-installation Wash Station, René built a sidewalk with Portuguese paving. In the projection, he spills a brown pigment and tries to clean it with his bare hands. "René evokes the tangible and intangible cultural heritage, the Portuguese sidewalk and language, to discuss if it's possible to wash away this common history between Portugal and Africa," explains Luísa Santos, an active curator on Artpool platform.

In Plants of the Gods, Rita Ferreira (Portugal, 1991) built an installation with paintings on giant papers, asking the audience to walk through them. It is a habitable herbarium with references to shamanic rituals, astrology, and hallucinogenic plants, that asks the audience to think about the power of images. What actually cures and what do we believe to cure us? Is there any difference between the effect of medications and the effect of placebos? Is the healing power in these medicines or within us?

Bruno Zhu (Portugal, 1991) displays a fashion show with objects that construct the figures of his sister, mother and grandmother to confront transcontinental references across generations. They face the sculptures of Andreia Santana (Portugal, 1991), that recall shells, skins and instruments of protection, and are both appealing and unsettling. The perfect spot where they are displayed - below a glass ceiling where visitors of the museum can briefly see the sky - create a dialogue with the cutting-edge architecture of the building, and makes clear that Andreia discusses dualities like inside/outside, hiding/revealing.

The big winner of this year's edition, Adriana Proganó (Switzerland, 1992), was selected by a judging panel to win a monetary prize of 20 000 Euros. In the project Little Brats, she created colorful and joyful characters with canvas and paint: whereas these figures inhabited her paintings before, this is the first time they have won a tridimensional presence in the space as sculptures. "They destabilize the physical and political space of the museum, undermining its seriousness and creating chaos in the exhibition," said Luís Silva. After all, who needs sobriety and traditionalism in an art prize for emerging artists? This is the perfect occasion to spotlight fresh ideas! 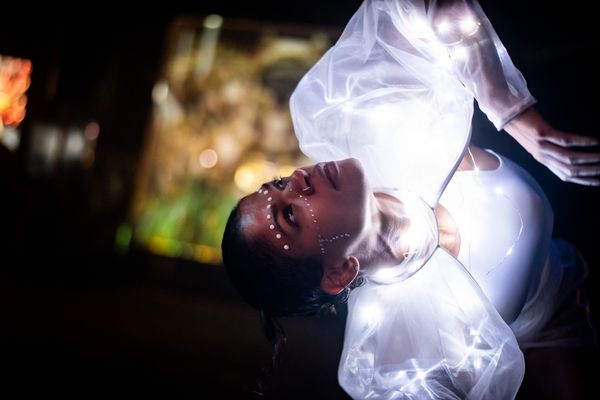